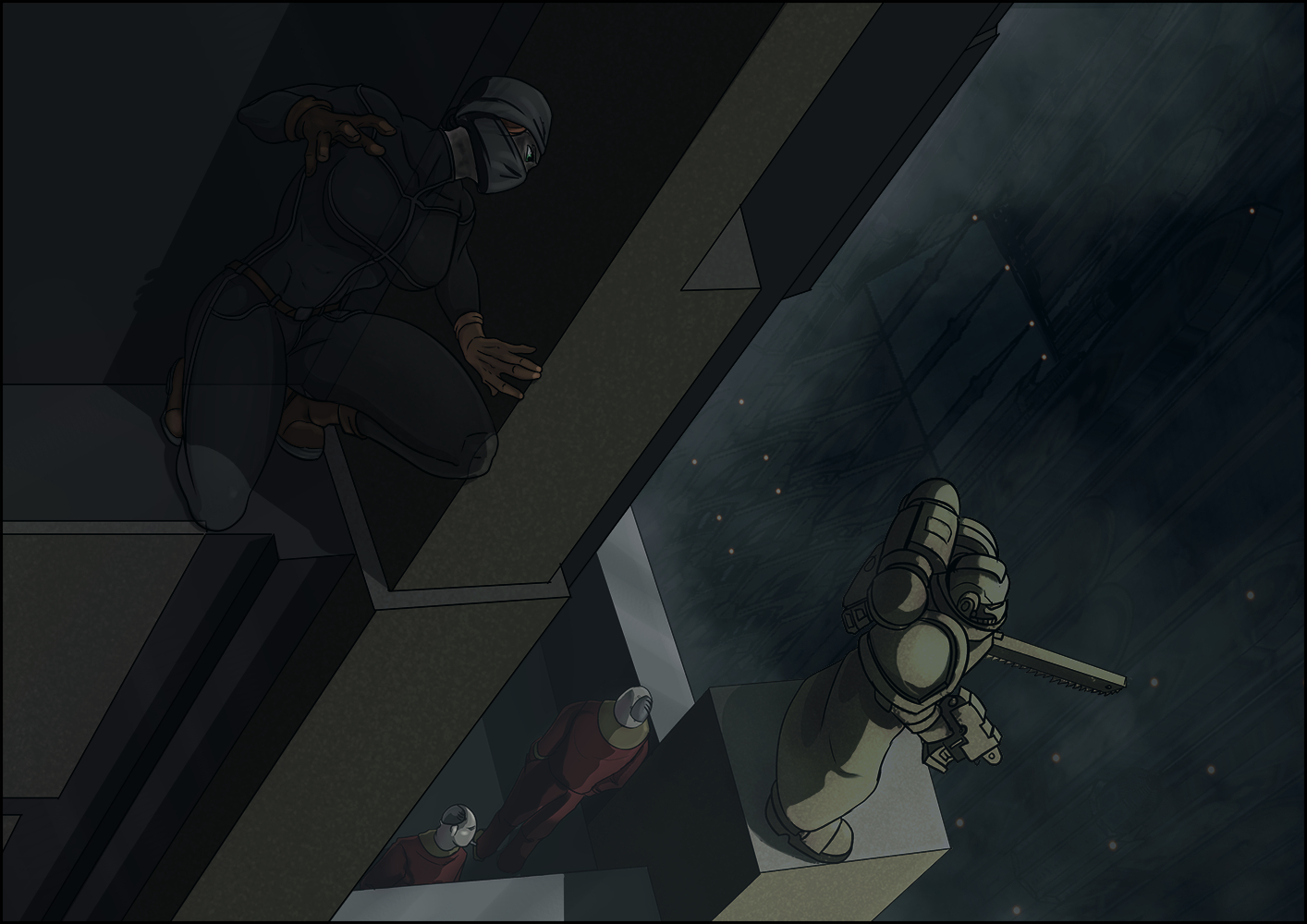 July 7th at 23:24pm
A weak beam of moonlight manages to timidly filter in the high levels of the hive where the planetary commissariat is located. Commissar Bryce, wrapped in her one-piece combat suit, lands a few levels above the monolithic administrative building and slides down its facade with almost liquid agility.

Well aware of the security systems of the building, it does not take much to deactivate the sensors of pressure, movement and heat from the upper floor and infiltrate through one of the armored windows, landing on her four extremities behind one of the security servitors. A quick click on his activation console cuts off the energy supply to his brain plunging the lobotomized slave into a temporary coma, with his arms replaced by heavy weapons dropping lifeless at his sides.

She crosses the spartan corridors and avoids the few souls that still work at this late nighttime by hiding in the shadows or behind the colonnades as she gets closer and closer to her goal; the central cogitatorii room of the planetary High Command in Chagoth Primus.

Finally, in front of the commissar, the compact double gates of the administrator militarum rise up. However, the adamantine and plastek reinforced doors, which should be able to withstand the impact of even heavy fusion weapons, are thrown open and a uniformed soldier furiously types again and again a command into the opening console.

The commissar takes advantage of this and approaches the room, but at that moment the soldier looks up to the narrow corridor. He is an elite soldier protected by heavy shell armor and wielding a heavy infernal pattern laser rifle. The lenses of his helmet open wide in a fraction of a second when they spot the commissar and without a word, the soldier raises the rifle and covers the clear path with a hail of laser beams.

"To all the units. Unknown attacker in sector 0. Requesting immediate reinforcements!"

The commissar barely has half a second to jump back and cover behind the corner of the corridor before the expert shooter riddles the back of the hall splashing her with rockcrete debris. The emergency lights should have jumped when the soldier raised the alarm, and yet, apparently nothing breaks the tranquility of the military sanctum sanctorum.


Commissar Byrce is almost unarmed and alone. Anya and the others await her at a safe distance from the building and she can`t receive any support from them. What should she do?

1-She can retire before the reinforcements arrive. Getting caught would not be… wise.
2-She can try to attack the soldier and make her way to the cogitadorii room.
3-She can blow her cover up and talk to the soldier to demand passage to the room.
4-Something else (What?)